From MECwiki
Jump to: navigation, search

(More general recommendations can be found at Forge OpenAPI Guidelines)

If you are willing to contribute or if you want more information, contact ETSI CTI.

ETSI CTI has also made a YouTube tutorial available (based on NFV) that provides guidance on how to contribute for MEC.

As of January 2021, OAS representations have been updated to reflect the latest released versions of their corresponding GS (e.g. v2.1.x); the representations follow OpenAPI 3.0 specification language.

The following figure provides a high level overview of the OAS creation and usage. 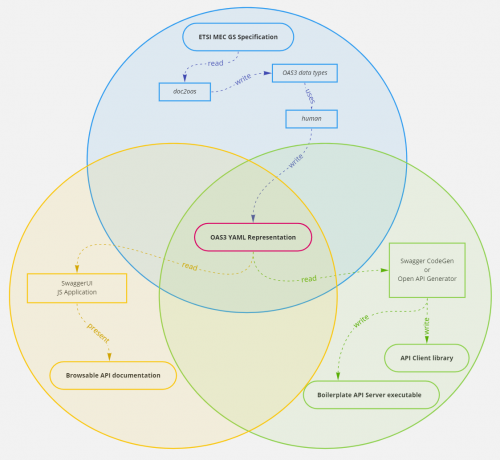 As shown on the figure, OAS YAML file is used in 3 different contexts:

As such, when developing or updating the OAS YAML representations, the 3 usage described above should be considered.

The following sections provide guidelines on how to develop and validate OAS represnetaions. 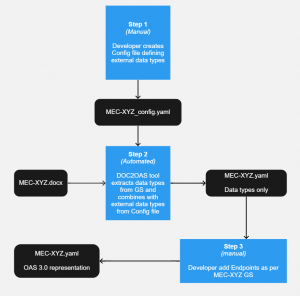 Step 3 - Add endpoints as per the GS specification

Once the YAML file is available, the following validation steps should be performed to verify the validity in the different usage contexts

Development follows a simplified version of the popular GitFlow

For example, work performed by a Specialist Task Force (stf123)

NOTE: Naming of of the JSON and YAML files is generally chosen by the DECODE group and does not necessarily follow the pattern outlined above.