From MECwiki
Jump to: navigation, search

The successful last edition of MEC Hackathons endorsed by ETSI took place on 25 to 26 November and was hosted by Droidcon Italy 2020 as a fully virtual event. The competition was open for developers to test their applications with ETSI MEC APIs (Application Programming Interfaces) in a variety of use cases.

The organizing committee received a total of 14 submissions, including several topics, from Augmented Reality for Construction Sector, to consumer, media and entertainment application, to automotive services.

They were also required to onboard their applications in real-life MEC systems and connect with the MEC APIs to receive simulated in-network data.

The Droidcon MEC Hackathon 2020 was organized by Intel, CISCO, TIM, Equinix and LINKS Foundation, and endorsed by ETSI and with the support of GSMA and Turin City. 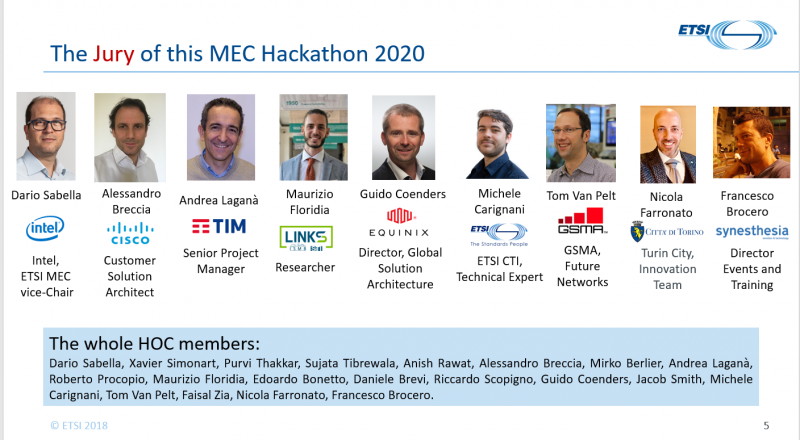 Developers’ teams at the Hackathon were tasked to develop Android applications for services in MEC-enabled 5G networks, running on OpenNESS platform and using ETSI MEC technologies.

The MEC Hackathon winner, UniMore, showcased a project on Cognitive mobility at the Edge, an automotive application solution exploiting features and services provided by the 5G MEC architecture (including a MEC Location API) in order to deliver low-latency location-based event notifications about traffic, congestion forecast, and mobility patterns.

As a part of the final software prototype, the UniMore team also released the Openness Connector java library on Github (https://github.com/openness-4-java) to ease the life of developers willing to interact with the MEC API provided by the Openness platform.

The UniMore team is composed by very experienced Droidcon Hackathon developers and researchers at the Department of Sciences and Methods for Engineering of the University of Modena and Reggio Emilia.

Among the other prizes, the Hackathon winner was offered the possibility to participate to the Smart Road project (a consortium of partners, from car makers, network operators, universities and the City of Turin), with the aim of proposing their developed solution as possible implementation for testing activities in the Turin urban environment. In this perspective, the UniMore Team continued the implementation activities related to their V2X applications scenarios.